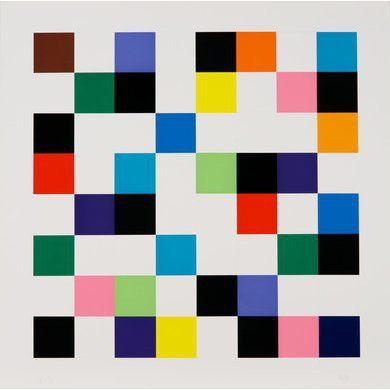 American artist Ellsworth Kelly is universally recognized as one of the most important purveyors of American abstraction. Born in Newburgh, New York, Kelly studied at the Pratt Institute in Brooklyn until he was drafted into the U.S. Army at the age of 20, spending the majority of his military service in Europe. From 1948 through 1954, he lived in France, teaching, traveling and studying art and architecture. French abstraction greatly influenced the young artist, whose style changed drastically during this early moment in his career. He abandoned figuration and easel painting, choosing instead to develop a vocabulary of simple geometric shapes and swatches of pure, vibrant color.
Ellsworth Kelly: Prints and Paintings is the first retrospective examination of Kelly’s exceedingly prolific print practice since 1988. The exhibition includes over 100 prints, the majority from the collection of Jordan D. Schnitzer and his Family Foundation, and five paintings. The exhibition is organized thematically in order to explore Kelly’s mastery of key formal motifs: grids, contrast and curves. In the words of catalogue raisonné author Richard Axsom, Kelly’s prints “exchange the totemic presence, the tangible physicality and public assertiveness of the paintings and sculptures for the qualities no less genuine in registering Kelly’s vision: intimacy, delicacy, and in nearly immaterial veils of shape and color, an unmatched ethereality.”﻿
Pubblicato da ocrablog a 01:03