I GOT RHYTHM - KUNSTMUSEUM STUTTGART 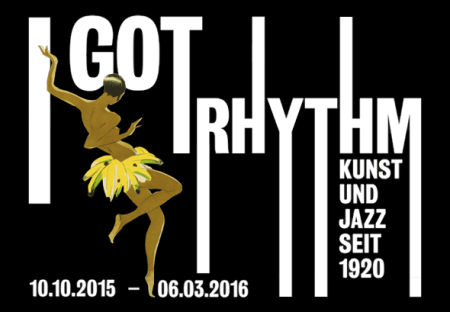 With a selection of works from the 1920s into the present day, the extensive special exhibition I Got Rhythm. Art and Jazz since 1920 at the Kunstmuseum Stuttgart will exemplify the close connections and interplay between jazz and the fine arts. On display will be diverse artistic explorations of jazz, starting with paintings of the classic modern period, continuing with works of European and American postwar abstraction and culminating in contemporary installations and video pieces. I Got Rhythm will unite major works from museums around the world. Enriching the exhibition will be a multifaceted program of events.
100 years ago, on July 11, 1915, a daily newspaper in Chicago published an article in which the term “jazz” appeared for probably the first time in connection with the Afro-American music style of the same name. This new dance music from the southern United States achieved its definitive breakthrough after World War I, as Joe King Oliver, Jelly Roll Morton, Bix Beiderbecke, and above all Louis Armstrong recorded their first albums. As jazz made its way to Europe in the ’20s, it also became popular in the dance halls, bars, vaudeville shows, and movie theaters there. The dawning century was forthwith declared the Jazz Age.
Due to its broad dissemination, jazz can be referred to as the first pop phenomenon. It inspired Bohemian society and the upper classes as much as it did teenagers and intellectuals. At the same time, jazz was perceived as the first autonomous cultural achievement of the United States. And not least of all, it was seen as an authentic sign for the beginning of Afro-American emancipation.
That jazz also had a sustained influence on art of the 20th century is demonstrated by the large special exhibition I Got Rhythm. Art and Jazz since 1920. Indeed, presented here for the first time is the connection between popular culture and art. Artists such as Otto Dix, Max Beckmann, Paul Colin, Adolf Loos, Piet Mondrian, and Henri Matisse made reference to fashionable dances, particular songs, and stars of the jazz age like Josephine Baker, who went on to become an icon of modernity.
Well into the 1950s and 1960s, jazz was synonymous with popular music, but was also an increasingly intellectual critical practice. Bebop and Abstraction embodied modernism and the Western paradigm of freedom. While working in his studio, Jackson Pollock listened solely to jazz for days and nights on end. Andy Warhol developed album covers for famous music labels. And on the other side of the Atlantic, K. R. H. Sonderborg collaborated with jazz musicians to stage painterly actions. As can be seen with artists such as Jean-Michel Basquiat, Marlene Dumas, Stan Douglas, and Kara Walker, numerous examples up to the present day reveal that jazz has directly influenced processes in the visual arts and will continue to do so.