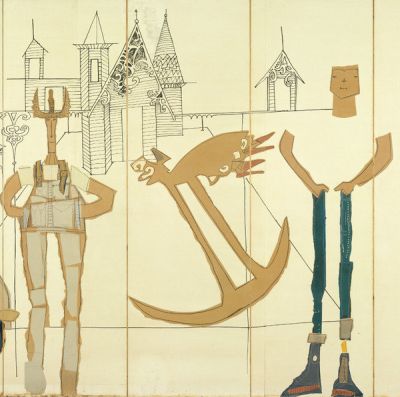 The Museum Ludwig is exhibiting the complete collage-tableaux The Americans by U.S. illustrator and cartoonist Saul Steinberg (1914–1999) for the first time since he created it in 1958 for the Brussels World’s Fair. The mural collage will be accompanied by a selection of related drawings from the 1950s and by a large number of the artist’s magazine illustrations.
Romanian-born Steinberg studied architecture in Milan before emigrating in the early 1940s to America. He settled in New York and achieved eminence chiefly as a result of the covers he designed for The New Yorker. For the U.S. pavilion at Expo 1958 in Brussels—the first world’s fair to be mounted after World War II—he created a large- scale mural collage consisting of eight panels with a total length of over seventy meters.
They present a critical panorama of everyday life in America, ranging from the hustle and bustle of the big city to the apparently idyllic world of rural communities. An array of collaged human figures dominates the foreground, sometimes singly, sometimes densely packed, always against a background of enlarged photographs of drawings. The figures testify to Steinberg’s assimilation of a wide range of artistic influences and to his creative engagement with a variety of media and materials, including drawing, photography, wallpaper, and scraps of packing paper and comics. His view of the American way of life, though affectionately humorous, does not exclude its darker aspects.
After Expo 58 the mural entered the collection of the Musées Royaux des Beaux- Arts in Brussels. Sections have been exhibited since, but the huge dimensions of the work have until now prevented it being shown again in its entirety.
The exhibition, which is accompanied by a catalogue in English and German, is organized in close cooperation with the Saul Steinberg Foundation, New York.