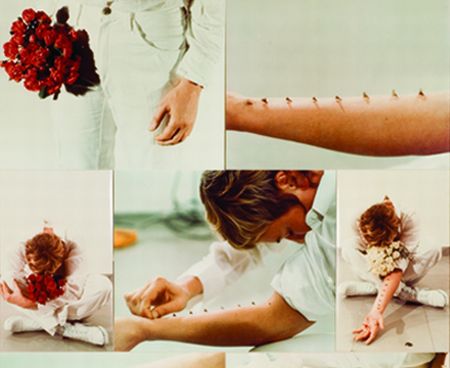 Parallel Practices: Joan Jonas & Gina Pane brings together selected works made between 1965 and 2010 by two artists renowned for their foundational contributions to the field of performance art. Jonas and Pane, as proto-feminists of the same generation based in New York and Paris respectively, worked multidisciplinarily in a moment when many of their peers focused attention on a single medium. Jonas’s and Pane’s work plays with and looks beyond medium-specific discourses, responsively engaging issues of temporality, narrative, politics, and myth. Parallel Practices celebrates shared and complementary aspects of Jonas’s and Pane’s art and highlights the differences that characterize their unique bodies of work. This exhibition also marks the first comprehensive presentation of Gina Pane’s oeuvre in the United States.

Joan Jonas’s (b.1936, New York City) experiments with video are among the earliest and most enduring investigations of this medium. Works like Good Night Good Morning (1976) mine the connections and discrepancies between real and televisual space as Jonas repeatedly greets a camera, recording her action for later viewing. Parallel Practices includes Reading Dante III (2010), in which literary narrative provides an inspiration for a multi-channel video and sculptural environment that blurs the boundaries between the inside and outside of the filmic frame. Beginning on May 4, Jonas’s performance work Mirror Check (1970) will be presented in CAMH’s Brown Foundation Gallery on Saturdays at 2pm.

Gina Pane’s (b.1939, Biarritz–d.1990, Paris) early works include a series of physical interventions in pastoral landscapes. Documented in sequences of still images, these works anticipate a series of actions in which Pane wounded herself to shock her audiences out of complacent states. Action Escalade Non-anesthésiée (Action Non-anaesthetized Climb) (1970) pairs a ladder-like metal structure whose rungs are covered with sharpened metal points with a grid of photographs that document Pane climbing on the structure to the point of total exhaustion. The constats d’action (proofs of action) are unique montages of photographic images—occasionally with drawings or notations—that Pane created to contextualize her actions. These are autonomous works that extend the life of the artist’s performances and communicate their sensibilities. A final series, the Partitions, are nearly alchemical transformations of spiritual iconography into expressions of otherworldly concerns.

Parallel Practices: Joan Jonas & Gina Pane is accompanied by an illustrated catalogue with an introduction by CAMH Director Bill Arning; a text by the exhibition’s curator, Dean Daderko; and commissioned essays by Barbara Clausen, Élisabeth Lebovici, and Anne Tronche. Designed by AHL&CO, it will feature full-color images of the exhibition, a checklist of exhibited works, artist biographies, and a related bibliography.