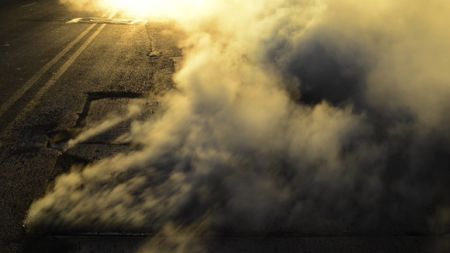 Carried by the wind, smoke usually follows the contours of the earth's surface. On flat, unbroken terrain and over water, smoke streamers take longer to spread out and mix with other streamers. Obstructions, such as trees and buildings, tend to break up smoke streamers. The streamers may then re-form, cover a larger area, and create a more uniform cloud than over open terrain. Large hill masses and very rugged terrain cause strong cross currents of wind and tend to create holes and uneven dispersal of the smoke cloud.

1. Use proper movement techniques and formations.
2. Time smoke support with decision points.
3. Use unobscured weapons to overwatch.
4. Do not become silhouetted by your own smoke.
5. Engage the enemy through the smoke.
6. Plan for enemy countermeasures.
7. Plan for additional maneuver time under smoke.
8. Maintain situational awareness.
9. Know where the enemy is.