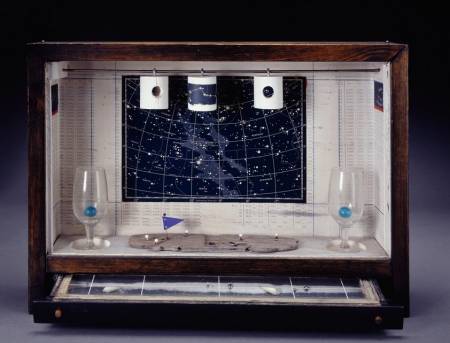 Joseph Cornell: Wanderlust offers an overview of the American artist’s inventive oeuvre, surveying around 80 of his remarkable box constructions, assemblages, collages and films. The last major solo exhibition of Cornell in Europe took place nearly 35 years ago, originating at the Museum of Modern Art, New York, in 1980, and travelling to the Whitechapel Gallery in the UK. With very few works on permanent display in European museums, the exhibition is an opportunity to see rarely lent masterpieces from public and private collections in the United States, Europe and Japan.
Cornell (1903 – 1972) never left America and hardly ventured beyond New York City, yet through his art he set out to travel through history, the continents of the globe and even the spiritual realm. His works are manifestations of a powerful ‘wanderlust’ of the mind and soul.
Collecting was central to Cornell’s creativity; he amassed a vast and eclectic personal archive of paper ephemera and found objects, eventually numbering tens of thousands of items. This material revealed his wide-ranging interests from opera, ballet, cinema and theatre to history, ornithology, poetry and astronomy. Europe held a special place in Cornell’s imagination, and many of the works selected for this exhibition highlight his love of its historic cultures, from the Belle Époque to the Italian Renaissance. Inspired by these interests, he incorporated his collected materials inside glass-fronted wooden box constructions creating miniature worlds known as his ‘shadow boxes’, as well as producing collages and film.
Cornell was entirely self-taught and has often been characterised as an outsider to the New York art scene. In reality, he was highly engaged with the art movements and artists of the time, exhibiting regularly alongside the Surrealists and Abstract Expressionists, whilst carefully maintaining his independence from any one group. He counted many vanguard artists among his friends including Marcel Duchamp, Robert Motherwell, and Dorothea Tanning.
The exhibition is arranged thematically in four sections that reflect the artistic processes expressed in Cornell’s diaries and notes; Play & Experiment, Collecting & Classification, Observation & Exploration and Longing & Reverie. The selection brings together key works from his major series: Museums, Aviaries, Soap Bubble Sets, Palaces, Medici Slot Machines, Hotels and Dovecotes.

Organisation
Joseph Cornell: Wanderlust is organised by the Royal Academy of Arts, London, in collaboration with the Kunsthistorisches Museum, Vienna (exhibition tour: 20 October 2015 – 10 January 2016). The exhibition is curated by Sarah Lea, Curator at the Royal Academy of Arts, and Jasper Sharp, Curator at the Kunsthistorisches Museum, with Lynda Roscoe Hartigan, as Academic Advisor. In London, the exhibition has been designed by Carmody Groarke.

Catalogue
The exhibition is accompanied by a fully illustrated catalogue with essays by Sarah Lea, Jasper Sharp, and Lynda Roscoe Hartigan with a chronology by Ben Street.