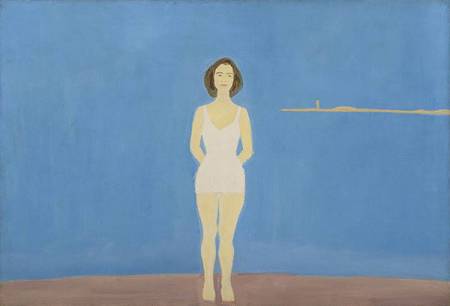 The early and little-known artwork of internationally acclaimed artist Alex Katz (b. 1927) is the subject of a major exhibition at the Colby College Museum of Art, on view from July 11 through October 18, 2015. Brand-New & Terrific: Alex Katz in the 1950s explores the first decade of the artist's career, a period characterized by fierce experimentation and innovation from which Katz's signature style emerged. Curated by Diana Tuite, Katz Curator at the Colby Museum, Brand-New & Terrific combines works from the collection with many rarely seen loans from the artist and other public and private collections. This the first museum survey to focus on the artist's output from this formative decade.
"The Colby Museum is privileged to serve as a center for the exhibition and study of Alex Katz's art," said Sharon Corwin, Carolyn Muzzy Director and Chief Curator. "Katz has such strong roots in Maine, where he started spending his summers in 1949, so we are proud to be able to present the first exhibition dedicated to his early work, much of which was made nearby."
Installed chronologically in the museum's 9,000-square-foot Paul J. Schupf Wing for the Works of Alex Katz, Brand-New & Terrific includes approximately 70 paintings, collages, and cutouts that trace Katz's technical and stylistic evolution over the course of the decade.
The 1950s saw Katz take up and master painting directly from nature, lay claim to Abstract Expressionism's size and scale on behalf of figurative painting, and innovate with collages and cutouts. It was a decade in which he looked to the portraiture of Édouard Manet for lessons in the relationship between figure and ground, and the one in which he met Ada, his most enduring model. Given the overwhelming popularity of painterly abstraction, this was also a period when he destroyed hundreds of canvases, and those that survived had little to no audience.
"We've borrowed the title from Alex Katz's 1961 manifesto 'Brand-New & Terrific,' which affirmed his intentions to find the contemporary in the traditional form of painting," stated exhibition curator Diana Tuite. "What is especially significant about this work is how much it enriches our understanding of the fluid and adaptive exchanges taking place in the 1950s between New York School painters and artists like Katz who were working within a more figurative tradition."
In conjunction with Brand-New & Terrific, the Colby Museum will present An Artist's Gift: Acquisitions from the Alex Katz Foundation, curated by Alex Katz and featuring works gifted to the Museum from the Alex Katz Foundation. On view in this exhibition will be a selection of artworks by contemporary artists including Elizabeth Peyton and Dana Schutz, artists of Katz's generation such as Ronald Bladen and Al Held, whose reputations continue to grow, and foundational early 20th century modernists such as Charles Burchfield and Marsden Hartley.
Alex Katz was born in 1927 in Brooklyn, New York and grew up in St. Albans, Queens. From 1946 to 1949 he studied at the Cooper Union in New York City. Katz's connection with Maine began in 1949, when he received a scholarship to the Skowhegan School of Painting and Sculpture. Katz became a summer resident of Lincolnville, Maine, and over the years returned to Skowhegan as a faculty artist more than half a dozen times. Skowhegan's co-founder, Colby Museum benefactor Willard Cummings, introduced the artist to Colby in the 1950s, and Katz has enjoyed a relationship with the College ever since.