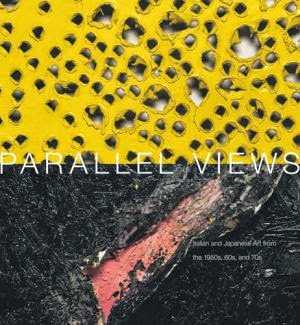 In the decades following World War II, both Japan and Italy were rebuilding after the ravages of war, constructing democratic political systems after a period of fascism. Parallel Views presents a breadth of postwar masters of Italian and Japanese art. The 145 artworks reproduced here include works by the Italian proto-Arte Povera and Arte Povera artists Alighiero Boetti, Alberto Burri, Lucio Fontana, Piero Manzoni, Mario Merz, Marisa Merz, Giulio Paolini, Giuseppe Penone, Michelangelo Pistoletto and Mimmo Rotella. Central figures in the Gutai movement—Matsutani Takesada, Saburo Murakami, Shimamoto Shozo, Shiraga Kazuo—are represented, as are important Mono-ha artists, including Lee Ufan, Sekine Nobuo, Suga Kishio and Takematsu Jiro, among others. This volume gives readers a unique opportunity to view works that have rarely been shown or considered together but in fact share common themes and concerns. As essayist Joshua Mack states, "modernism was not a process extending a dominant model from Paris or New York to outlying countries, like Japan or Italy, but rather a process of exchange between interlinked nodes. Its dynamic is a process of creative interpretation in which concepts originating in one context were understood differently in another." A panel discussion among three leading scholars of this period in Italian and Japanese art further examines the connections and simultaneities between the art and artists of this period. Parallel Views invites readers to explore a body of artworks that have been overlooked until recently but warrant renewed attention.
Pubblicato da ocrablog a 21:42