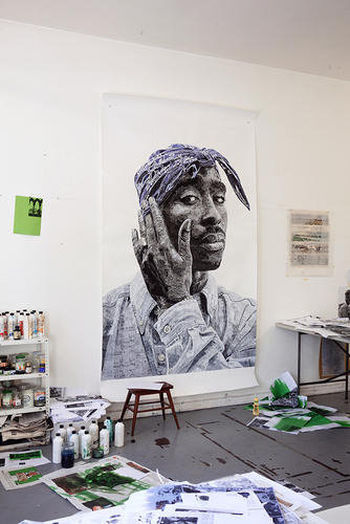 In his seventh exhibition at Anton Kern Gallery, German video and collage artist Marcel Odenbach presents five large works on paper along with a group of objects. The eye-catching centerpiece is a portrait of rapper and songwriter Tupac Shakur (1971-1996), surrounded by images of shrubs and trees in urban green areas, a pair of gardener’s overalls drying on a clothesline, and five collaged African seed pods in a display case.
Viewed at a distance the collages convey a sense of tranquility and casualness, however upon closer inspection, the subjects’ latent histories are slowly revealed through hundreds of images that make up the larger work. Images relating to the history of the civil rights movement and early 1990s American pop culture depict a 23-year-old Tupac at the height of his fame, in all his serene coolness and splendor, even showing a touch of fragility. Correspondingly, the collages, entitled Grünfläche 1-3 (Greene Zone 1-3) and Nach getaner Arbeit (After the Work is Done), reveal underlying stories of religious delusion, racism, and murder. Ina reversal to the apparent covering-up and veiling of the truth through the metaphor of unrestrained growth of urban shrubbery, Odenbach has taken five objects from nature, large seed pods he collected in Ghana, and in turn covered them with images referencing a variety of stories that range from the life of Irish-born painter Francis Bacon to current events such as the murder of twelve people at the offices of the French satirical magazine Charlie Hebdo.
Odenbach’s work focuses on social issues and human struggles that resonate with his own personal history. Continuing themes include German history, German-Jewish culture, civil rights, social justice, and freedom of expression, among others. This dialectical pull of an enticing overall image and the complexity of the underlying social issues and narratives is characteristic of Odenbach’s collage as well as video work. The artist’s seemingly dissimilar practices – collage and video – share a similar process. The highly methodical way Odenbach works with paper (transferring, cutting, sorting, compiling, and layering found images) mimics early video editing techniques. The artist culls collage materials from a vast personal archive of press clippings and photographs. He photocopies the original materials onto acid-free watercolor paper, dyes each piece in a wash of watercolor, and sorts them into piles according to hue and theme. With the overall image plotted out in advance, Odenbach assembles the work in a systematic process.

Odenbach (b.1953), who lives and works in Cologne, has participated in numerous international solo and group exhibitions and currently teaches at Germany’s most prominent art school, the Academy of Fine Arts in Düsseldorf. His work is included in many public collections including the Museum of Modern Art, the Centre Pompidou, Museum Ludwig, and the National Gallery of Canada. While primarily known as a pioneer in video art, Odenbach has been creating drawings and collages for over 30 years. The Kunstmuseum Bonn recently highlighted this significant aspect of his career with the exhibition, and accompanying catalogue, Marcel Odenbach: Papierarbeiten 1975 – 2013.